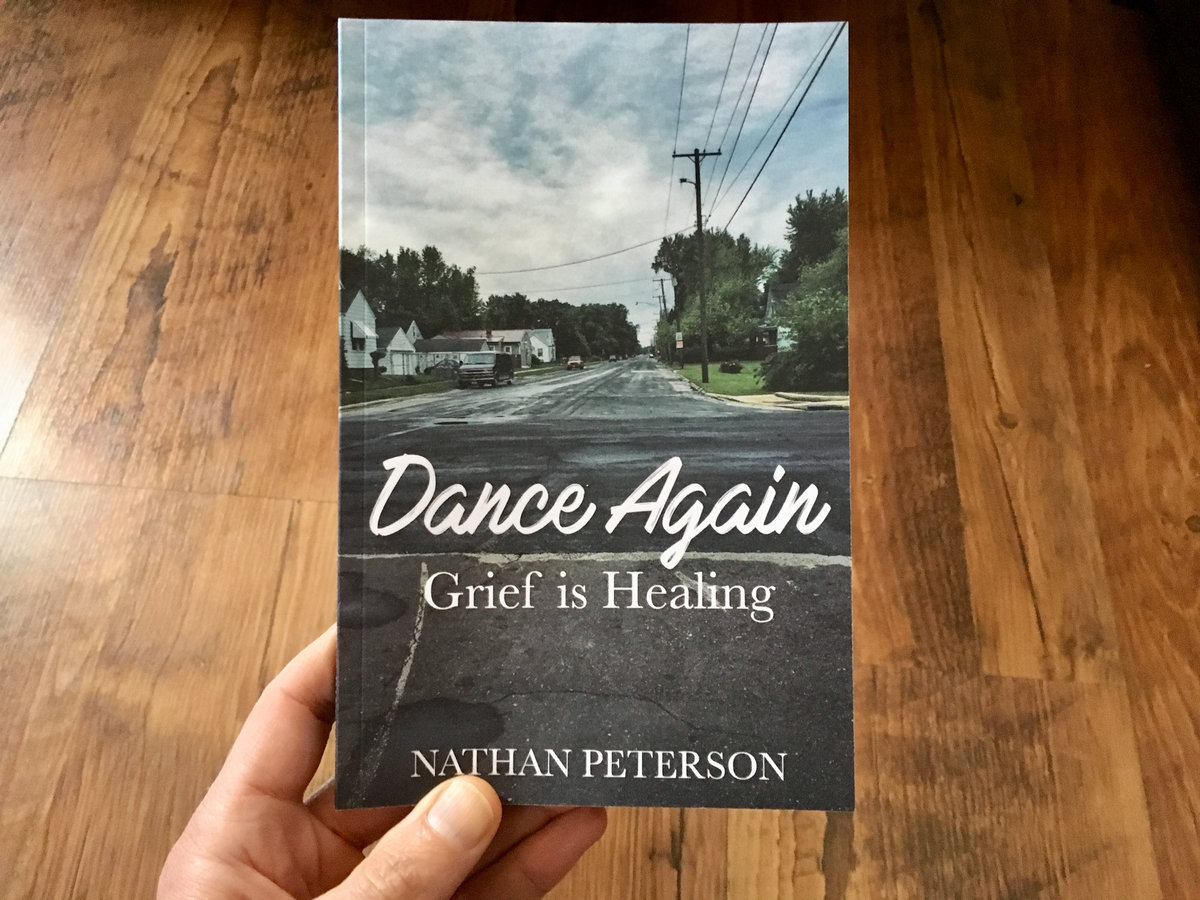 I wrote this book at a time in my life when I was experiencing what many of us are experiencing today: uncertainty, fear, and grief. I hope that reading this book will support you in discovering how grief can be healing.

Buy on Amazon
(kindle or paperback)
(PDF, EPUB, MOBI - readable on all devices)

"Helped me touch in with my own grief, gently, and feel both greater connection to what really matters and deeper healing. I am so grateful!"
‍—e-book reader

"The story of a man who swings between despair and hope, failure and faithfulness, turmoil and rest, in his pursuit of true humanity... A book that should be read."
—Dr. Larry Crabb, author of Shattered Dreams

Fear at the Door; Rest Inside (sample chapter)

In the spring of 2012, I heard this word, “Rest.” I realized how horrible I was at it. I wasn’t even sure what it was. Was it extra sleep? Was it not working on Sundays? Shortly after I heard this word, my life began changing. For one reason or another, one by one, the things with which I occupied myself were stripped away until I found myself with nothing left to hold.

A year later I was in a panic, wondering how we were going to make ends meet. Everything in me said to do what I had always done: get on email, get on the phone, make the next thing happen. Anyone who knew me knew I was someone who could make anything happen. If I didn’t know how, I bought a book and learned. Anything I ever wanted I found a way to get.

Then I heard the word again, “Rest.”

“What?! Now? No. My family is depending on me. My reputation is at stake. I don’t have time for rest. I will rest when things are okay.”

I decided to do the exact opposite thing my insides were telling me to do. I went to the backyard, sat on a chair, and watched. I did not know what I was watching for. I listened. I did not know what I was listening for. Every time a thought or an idea came to my head, I wrote it down and then resumed sitting. It was horrible, like ignoring an itch for hours. I knew that if it was this hard for me to physically sit still, it was important for me to learn. If my body could not sit still, then how could my mind or my heart? So I decided to discipline myself to sit that way at least one day a week.

Eventually, I sat this way more often. Meanwhile, my professional life continued to fall apart and the temptation to do something about it grew. I heard so many voices, some from friends and family but most from my own head:

“You’re lazy.” “You’re being irresponsible.” “What are you doing??!!” “It’s up to you to provide for your family.” “Get up and make something happen, now!”

Simultaneously I heard another voice:

This was the summer of 2013. A year later, we received the call about our soon-to-be-born baby’s condition. I had thought that the urge to get up and do something was strong before, but now this was on an entirely new level. Again I heard the voice say “Rest”, so we didn’t research Trisomy 18. We didn’t look for different doctors who would say something we wanted to hear.

I continued to sit and stare at the fence, quieting my body, and eventually, at times, quieting my mind and my heart as well. I can not even describe the amount of Fear that was present. But this time it was different. It was as if in the past Fear had walked in the door and I was afraid; now Fear stood in the doorway and waited to be invited in. More and more Fear gathered at the door, but it did not come in. It only waited. I could see it there. It was terrifying. But I wasn’t able to invite it in. Rest was occupying the space instead.

The moments in the hospital on January 7th 2015 - I thought my wife might die. I expected to hold our lifeless baby that morning. I knew I would speak at Olivia’s funeral and not know what to say. It was like a nightmare. But I remember it. I was there. If she would have lived only an hour, I would have been there for that one hour. Because Fear was at the door, but Rest was inside. My posture was rest, quiet, and trust. It was not about making things happen. It was about watching, listening, and being there and nowhere else. I was not going to miss it, as horrible as it could have been.

During the first few months of Olivia’s life, Fear kept congregating at the door. We thought we saw her last breath so many times. We were so sleep deprived. I passed out one day just walking across the room. At this point, I felt pretty incapable of getting up and making something happen. The doctors were clear that there was nothing we could do. Hospice was at our house every few days. I was not tempted to get up and do something about Olivia. Now I was tempted to get up and work. To make sure the bills got paid. To make sure my career did not disappear any more than it already had. But underneath was a stronger need: to run, to get the hell out of this situation. Work can be an easy place for a man to avoid the realities of his life. It was pretty obvious though, that work was not to be my focus - that whatever time we had left with Olivia was to be cherished - every minute of it. Still, I felt the urge to run more than ever.

I continued to hold the posture. To sit. To stare at the fence. To listen quietly. I was not going to miss it.

I was there the whole time. All 14 months of her life.

I lost my posture at times. But I can say that the 30-year-old Nathan (five years ago) would have occupied himself the entire time, trying to make things happen, running like crazy away from the pain. No. I had practiced for this all year. I knew how to allow the itch, the pain, to be there and not to move. I knew how to allow the voices in my head and the voices from others to be there without being influenced by them. I knew how to go deeper within my Self, to the place where a still and quiet voice whispered the word “Rest” over and over. I had practiced the posture; the time had come to use it. I was there the whole time. I did not miss my daughter’s life.

In March of 2016, when I got the call that Olivia had stopped breathing, I was on a bike ride with our other three kids. Time stopped. Jude asked if Olivia was okay, and I was able to look at him and say, “Yes. Even if she does die, all of us are okay.”

We rode our bikes so fast. Fear was now filling the doorway and had crowded around the house and the windows and as far as the eye could see. We rode our bikes. I didn’t feel much, but the tears streaming down my face told me, “Today is the day. It is finished.” We kept riding.

I don’t remember getting off my bike. I’m guessing I had never run so fast. But I will never forget the feeling of walking through the back porch door and seeing Heather and Olivia there. The most sinking and unreal amount of pain I have ever felt mixed with an equal amount of peace, beauty, and a sense of victory.

After a lot of crying, the only words I could say to Heather were, “We did it.” We won. Olivia won. Heather won. I won. Our family won. Our community won. Yes, Olivia died, but that was never the battle we were fighting. We had chosen to fight Fear instead.

I don’t think I have experienced the remainder of that day, or the next few days, or the funeral or the burial yet. I think I’m still back processing the day Olivia was born. It’s weird. I have never grieved like this before, but I think the body has a way of pacing how much pain it allows in at once. I’m realizing now that we will be experiencing the pain and the beauty of Olivia’s life and death for a long time. I don’t know if or when we will ever feel normal or even functional again. But I do remember one thing about the morning after Olivia died, vividly.

I remember going for a run and the feeling of Rest overwhelming me. Not happiness or excitement - I was very sad - but so much Rest. And I remember noticing how little Fear I sensed, like it was not even at the door anymore. It was as if the battle had ended and Fear had lost and it just turned and went home. There was no temptation to run or to make anything happen. Olivia was dead but I felt an amazing amount of Rest. And trust. And quiet. And strength.

Since that day, Fear has returned to my door. I have struggled more than ever to rest. This battle is never-ending. But once you win one battle, every battle after is different. Now you know you can win. You know what it feels like to say “we did it” and you know you can do it again.

I have a feeling the next year is going to be more difficult to rest than the previous two years were. That is a very overwhelming thought. But I have a wife and three living kids and one sleeping daughter who need a husband and a father who knows how to rest. That is what I will choose to do.

Fear at the door; rest inside.

Dance Again: grief is healing is a collection of my writings from the year after our 1-year-old daughter passed away.

I also recorded an album during this time, also called Dance Again.

The album is available on all streaming platforms including Bandcamp.

Support me on Patreon

Support the making of my art for as little as $1
Sign Me Up!

Thank you! Your submission has been received!
Oops! Something went wrong while submitting the form.